The 4 Essential Phases of the Intelligent Leadership Executive Coaching Process 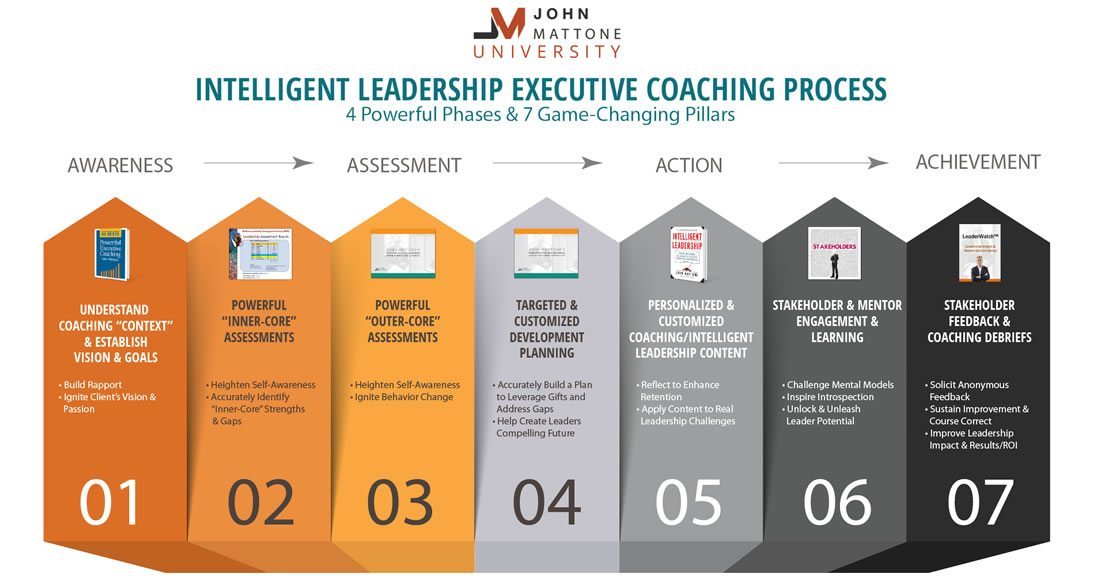 Awareness begins with a meeting between the coach and the executive team, which typically consists of the executive being coached, the person they report to, a senior executive, and the CHRO. During this step, discussions take place to further understanding of the coachee’s background, goals, and anticipated outcomes. The discussions also help ensure the entire team is committed to the coaching process.

In addition, the executive coach meets individually with the executive who is being coached. One of the goals of this meeting is to review and reinforce the information obtained in the initial group meeting. In some cases, expectations may need to be further clarified. Another goal is to ensure that the executive him- or herself is thoroughly committed to the coaching process. An in-depth interview concerning the coachee’s life, career, strengths, shortcomings, and motivations is also part of the Awareness phase. This is a very in-depth interview that can take up to four hours to complete.

The second step in the IL executive coaching intervention is Analysis. The coachee will complete three inner-core assessments: the Mattone Leadership Enneagram Inventory (MLEI), the California Psychological Inventory-260 (CPI-260), and the Input-Output Processing Template (IOPT), and a 360 multi-rater survey is initiated. Typically, the IL certified coach will conduct confidential interviews with 5 to 7 of the executive’s closest stakeholders as a way of complementing the multi-rater survey. Then the coach and client meet again one on one to define expectations and discuss the competencies required for success in the executive’s current role and any anticipated future role. Over the next three to four weeks the IL certified coach works closely with the executive to get them to connect more closely with their inner-core through assigned readings and exercises. One of the most powerful exercises in the IL process is the Core Purpose Statement exercise which requires the executive to think deeply about who they are, the essence of the person and leader they want to become and most importantly defining the essence of the person and leader they must become. This phase can be a real “game-changer” for an executive if they are willing to be vulnerable and willing to do the introspective work. There is no doubt, that great work done here will “spill-over” to the next step when the IL certified coach helps the leader bridge to building their more concrete Individual Leadership Development Plan (ILDP).

One of the first goals the IL coach and executive should accomplish is a thorough review and debrief of the assessments the executive participated in. The IL coach will typically take three to four hours to conduct this debrief. The IL coaching process is designed to provide laser-focused accuracy in defining the health, strength and vibrancy of the executive’s inner-core and outer-core leadership competencies. The IL process accomplishes this through the mix of assessments, interviews and the certified coach who is well-versed in interpreting these assessments and connecting the data points presented by each assessment individually and collectively. In coaching, as in medicine, prescription before diagnosis is malpractice. Once the thorough diagnosis is completed, attention now turns to creating the Individual Leadership Development Plan (ILDP) that should leverage the executives strengths and gifts and address their leadership gaps. Defining the starting point is necessary to measure progress later.

Defining the starting point is necessary to measure progress later.

It is in the Action phase that the executive concentrates on making specific changes necessary to fulfill the ILDP they developed with the coach’s help. At this time, the executive may do things such as:

Throughout the Action phase, the executive and coach communicate regularly, either in person or by phone. This ensures focus is maintained upon the ILDP and allows coach and client to discuss successes as well as problems or obstacles.

The Achievement phase of the IL executive coaching process is the pinnacle. During this phase, LeaderWatch mini-360 surveys are typically sent to stakeholders to solicit their feedback on how the executive has improved. The results of the LeaderWatch surveys are discussed with the executive, and if any recommended course corrections become evident, they’re documented. When the time comes that executive, coach, and stakeholders concur that the executive coaching process has delivered on expectations, that’s not the end of it. The coach then begins a “phase-down” period in which the executive increases use of target behaviors of his or her own volition, without regular need for one-on-one coaching. Finally, several weeks after the final coaching session, the coach and executive can hold a formal follow-up session. This is an excellent opportunity to discuss feedback, acknowledge the achievement of goals, and prepare a final report on the outcome of the IL executive coaching journey.