Most of us have some idea of our inner-core (i.e., character, self-concept, values, thinking patterns, emotional make-up, etc.) strengths and weaknesses, but we may not know much about how the inner-core strengths and weaknesses we possess translate into the “traits” that ultimately determine how you come across as a leader, which are the outer-core leadership behaviors we exhibit. Said another way: the strength, vibrancy and maturity of your inner-core determines the strength, vibrancy and effectiveness of your outer-core.

There’s no one “correct” leadership style, because every organization is different and needs to be led differently. But anyone who wants to excel as a leader needs to know where they are strong and weak both in the inner-core as well as the outer-core. Great leadership is less a function of what your predominant trait is and much more a function of the overall maturity of your traits, all of which combine to determine your leadership presence and effectiveness. 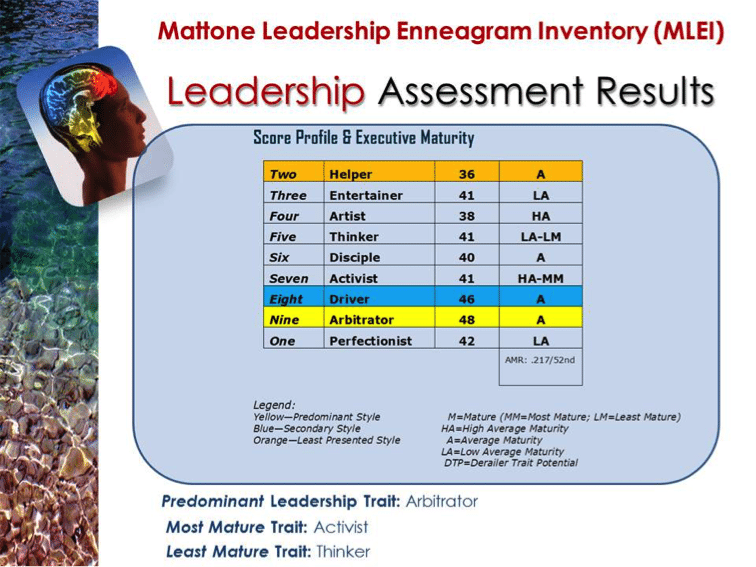 That’s why I created the Mattone Leadership Enneagram Inventory (MLEI). This powerful assessment was first created by me back in 1997. I have spent years revising, validating, and testing the MLEI constructs both empirically as well experientially with executives I have coached all around the world. While there is no perfect assessment, I have found the MLEI to be an accurate measure of a leaders inner-core maturity as it isolates strengths and gifts that need to be leveraged as well as the weaknesses that need to be addressed. Problems with leadership almost always boil down to immaturity. But the great news is, immaturity can be addressed and overcome once you know where it resides and what it looks like. 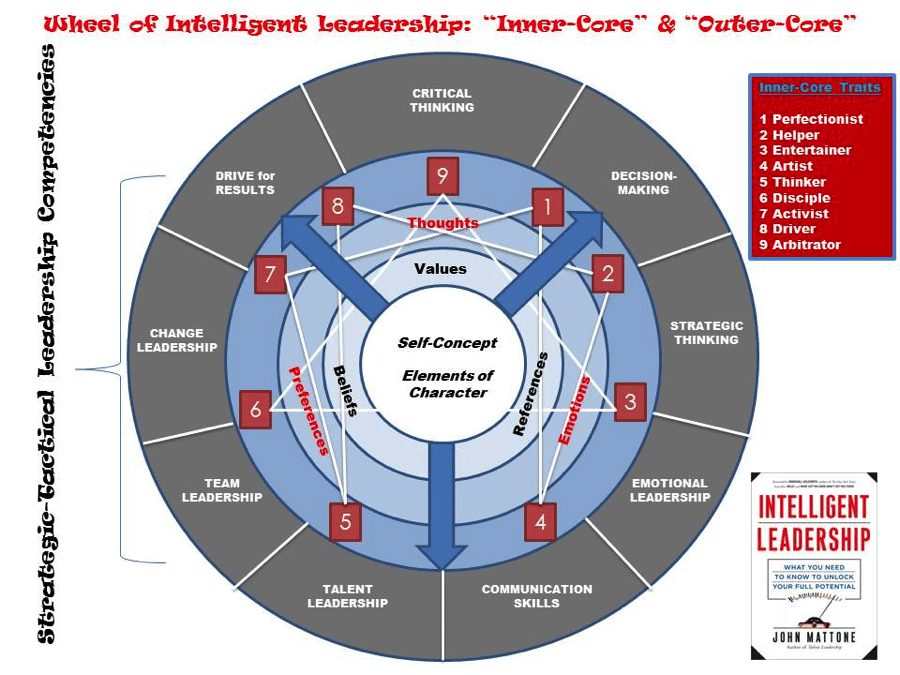 Based on my leadership enneagram, the nine-pointed diagram that dates back to ancient Babylon, the MLEI helps a person chart their own (or someone else’s) thinking patterns, emotional make-up and feelings, and provides an accurate picture of someone’s overall inner-core maturity. There are three basic leader trait combinations, each of which is further subdivided into three subtypes. We all operate in all three trait combinations and we all possess each one of the nine traits. The most important questions for a leader, however, are: (1) which trait is my most active or predominant trait? and (2) how mature are each of my nine traits and how mature am I overall?

People who predominantly lead from the heart tend to find that their emotions are their greatest strengths and their greatest weaknesses. Mature heart leaders, though, are admirable for having emotions and not leading in a robotic or unfeeling manner. The three subtypes of heart leaders are helpers, entertainers, and artists.

People who have outstanding ability to think and get things done are predominant head leaders, and they can accomplish amazing things. With maturity, head leaders can lead to new levels of achievement, impressing followers and competitors alike. But insecurities can derail the maturity of head leaders, causing them to live too much in their heads or feel like they must constantly be engaged in activity. Subtypes are thinkers, disciples, and activists.

Gut leaders are strongly engaged with their environment, but immaturity in a gut leader can cause frustration due to the fact that we live in an imperfect world. They may be disappointed in their own lack of standing, when people fail to live up to their expectations, and when people don’t strive for perfection. The gut leader subtypes are drivers, arbitrators, and perfectionists.

Knowing which of your traits are more active than the others is important, but so is understanding the thoughts and behaviors that can derail you. The person who knows these things stays true to himself or herself, and can often get back on track when derailing attitudes or actions arise. If you want to take the MLEI on-line, there is a small charge to do so but simply email me for more information at info@johnmattone.com. Organizations that hire me for half- or full-day programs or my Intelligent Leadership Executive Retreats, we include the MLEI for all attendees and delegates.