Here’s the background. You are the chairman of a One-Billion Dollar multi-national internet company with a strong brand. Your company is best known for its web portal, search engine, and social media website services. Your company’s revenue and income have been “flat” since 2008. Your company has had five CEO’s in the past five years, one of whom was asked to resign for falsifying his resume.

You and other members of the Board have had an interim CEO running the show for the past few months but it is now time to hire a permanent CEO. You and the Board decide it is better and more prudent to hire from the outside, even though your company has a number of outstanding senior executive candidates who have been with your company for years and who have been “tested” and “rounded” as solid, experienced leaders. You and the Board decide to approach a highly visible candidate who is currently a vice president and not a member of the senior executive team from your chief rival. You have targeted a young, talented technology guru who is bright and driven. You offer her the CEO role and she accepts on July 16th, 2012.

The company I am referring to is Yahoo, Inc. The Chairman I am referring to is Fred Amoroso. The new CEO is 37 year-old Marissa Mayer. Let me state from the start that I do not know Fred Amoroso, anyone on the Board at Yahoo, or Marissa Mayer. I wish her the absolute best in her new role and I want her to succeed. Nobody can question her capability as engineering whiz and technology guru.

When Mr. Amoroso made the announcement about Yahoo’s new CEO, he said “we unanimously agreed that Marissa’s unparalleled track record in technology, design and product execution makes her the right leader for Yahoo.” In her statement to the press soon after being named CEO, Mayer said, “I am looking forward to bringing dedicated products, content and personalized experiences to users and advertisers all around the world.”

Both of these statements, unfortunately, reflect a lot of what is happening in the world of CEO succession. If I had had the opportunity to advise the Yahoo Board prior to making their decision, I would have said, “Yes, you need a CEO who possesses an unparalleled track record in technology and product execution, but, most importantly, you need a CEO who has demonstrated the capability and experience to motivate, engage and unleash the massive leadership and individual talent that exists at Yahoo.

I would have advised the Board of the need for performing “due diligence” to determine if Marissa Mayer or any other candidate for that matter, had the capability to lead Yahoo. In my experience as an advisor and coach to the C-Suite, I have witnessed the tendency for Boards and senior executive teams to be overly subjective and rely too much on “instincts” in making critical promotion and hiring decisions. When subjective views of a leaders’ capability, commitment and alignment “win-out” over objective views (i.e., using assessments and in-depth interviews), especially in making CEO and senior executive decisions, there are a lot of mistakes.

According to Bloomberg, CEO hiring and firing is at an all-time high. In my research and consulting work with senior teams, companies don’t hesitate performing “due diligence” when they are making acquisition or divestiture decisions; but when it comes to CEO hiring, there is comparatively very little “due diligence” being done. I try to guide senior teams to recognize that mitigating operating risk and ensuring their competitiveness has much more to do with the quality of their CEO than anything else.

If I had the opportunity to coach Marissa Mayer, I would suggest to her that in addition to “bringing dedicated products, content and personalized experiences to users and advertisers all around the world,” that she must create a powerful, compelling work environment that motivates, challenges, engages, and unleashes talent. I would suggest she meet with other CEO’s from other companies in other industries to learn how they think and operate.

I would suggest she meet Anne Mulcahy, former CEO of Xerox. Here’s why: When Mulcahy took over Xerox in 2000, she delivered a blunt message to shareholders, “Xerox’s business model is unsustainable. Expenses are too high and profit margins too low to return to profitability”. Shareholders wanting easy answers to complex problems, started to dump their shares which drove Xerox’s stock price down 26% the next day. Looking back on that dark time, Mulcahy admitted she could have been more tactful, however, she decided that it would be more credible and authoritative if she had acknowledged that the company was broken and dramatic actions were needed.

When Mulcahy was named CEO, while she had been with the company for 25 years and knew the company well, she quickly acknowledged her lack of financial expertise. She quickly enlisted the treasurer’s office to tutor her in the fine points of finance before meeting with the company’s bankers. Her advisors declared her to file bankruptcy to clear 18 billion in debt, but Mulcahy resisted, telling them, “Bankruptcy is never a win”.

In fact, Mulcahy thought that using bankruptcy to escape debt would make it more difficult in the future for Xerox to compete seriously as a high-tech player. Instead she chose a much more difficult and risky goal: “restoring Xerox to a great company again”. To gain support from Xerox’s leadership team, she met personally with the top 100 executives. She let them know honestly how dire the situation was and asked them if they were ready to commit. A full 98 out 100 decided to stay and the bulk of them are still with the company today. As we reflect on Mulcahy’s actions you see numerous examples of her executive maturity: character elements of honesty,modesty, humility and courage; powerful sense of vision; empowering others; and passion, drive and incredible zeal.

In summary, as I state in my new book, Talent Leadership: A Proven Method for Identifying and Developing High-Potential Employees, for companies to successfully mitigate operating risk going forward they must: (1) do a much better job hiring/promoting executives at all levels—especially the CEO level; and (2) do a better job coaching and developing executives at all levels—especially the CEO level. Yahoo, Inc., is no exception. 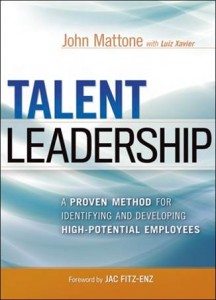