It only stands to reason that without leadership experience, most emerging leaders lead based on their own beliefs, values, self-concept, ingrained thinking patters and emotions or what I call their inner core. But many young leaders aren’t aware of their inner core characteristics, even though they help define and shape each person’s unique leadership style. Those that do demonstrate self-awareness often struggle with what I call “self-regulation”, meaning they continue to act and behave ineffectively despite being aware of their ineffective tendencies. In other words, they are stuck!

Know your inner core so you can develop the right skills to become an outstanding leader.

I first developed the Map of Leadership Maturity in 1996 as part of one of my earlier books, Success Yourself, but have continued to shape and refine the “Map” based on my work as a coach with leaders all over the world. My mission is to help leaders and emerging leaders develop the self-understanding necessary to recognize, accept, embrace and take purposeful action to continue to polish and leverage their strengths and address their development needs. My book, Intelligent Leadership (2013) presented these refinements and advancements and all that I had learned about leadership and people since Success Yourself was released. Today’s organizations tend to expect individuals at all levels to be leaders, and it’s certainly required if you want to thrive. But not everyone is ready and willing to take on the responsibilities of leadership that their companies need them to assume. 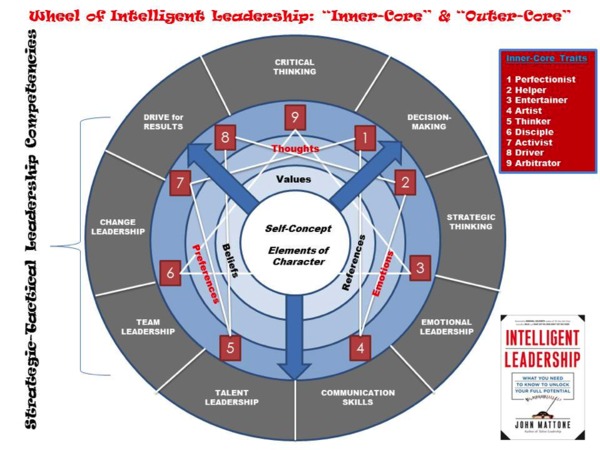 Each of the nine “Map” points corresponds to a singular way of thinking and feeling based on inner-core drivers such as self-concept, values and character and results in “behavioral tendencies” or potential to act in a predictable way. The “Map” is less about personality and more about “tendencies” that spill over to leadership behaviors in the outer-core. The three main leadership groupings in The Map are the Heart, Head, and Gut. Everyone is guided by Heart, Head, and Gut to some degree, but people tend to exhibit characteristics in one of the groups more than the other two. The three main leadership groups are each further refined into three groupings to make up all nine points on the “Map”.

Heart, Head, and Gut are too broad to capture the complexity of leadership potential, so each is further subdivided into three subtypes. Specifically:

Each of us can develop our tendencies into a unique and effective leadership style.

As with the three main leadership categories, people tend to have the characteristics associated with one subgroup more than others. Each subcategory differs in relation to the dominant trait of the leadership category, with one subcategory overdeveloping the trait, another under-developing it, and the third out of touch with it. Each of these are at the root of a leader acting immaturely or in a derailing manner. For example:

Using the Map of Leadership Maturity

While these very brief descriptions of the nine points of The Map of Leadership Maturity they may help you place yourself in one of the triads. However, they may not help you learn your predominant trait. You can always ask other people you work with what they think your predominant trait is, and how mature you are with respect to thoughts, attitudes, and behaviors associated with it.

I developed the Mattone Leadership Enneagram Inventory (MLEI) in 1996 but through refinement and further research and coaching work, the MLEI has advanced into being a powerful inner-core assessment tool used by companies and leaders all over the world. We have well over 10,000 global leaders who have taken the MLEI, including Steve Jobs, the former CEO of PepsiCo, Roger Enrico, and many other CEO’s and global leaders. One of the main goals of The Map is making you aware of changes you need to make to become a better leader. When groups hire me to conduct half-day, full-day or multi-day retreats with executives, we include the MLEI and MLEI Interpretive Report with the speaking fee. Some clients ask me to write a more detailed report based on their profile and this is called the MLEI Coaching Report. I am also very busy conducting virtual debriefs with executives where I interpret their profile and offer them developmental recommendations

The Map of Leadership Maturity is the only Enneagram specifically designed to address current and emerging leadership development, growth, and maturity. Once you better understand your inner core and potential, you will make wiser decisions, be more prepared to lead change, create teams, resolve conflict, and communicate in ways that will raise you to higher success levels. Benefits are experienced by you, your teams, and your organization as you become better able to understand others and build the strength and versatility that connects your inner core with your outer-core competencies and beliefs. I encourage you to check out my blog, and see for yourself how useful The Map of Leadership Maturity is and experience how it can help you become the mature, accomplished leader you know you can be.